Many manufacturers have released new generation 5MP / 6MP cameras that tout super low light, WDR and other features historically typical in 1080p but not 5MP / 6MP. In our recent series of tests we tested four of these models from major manufacturers against their own comparable 1080p version:

Now, in this shootout, we put them head to head and report on how they compare. Inside we report on:

Based on our tests, there are three key takeaways from this shootout:

Horizontal field of view width was matched for testing, to show differences in performance across the same field of view, including differing PPF due to these imager differences.

Note that Avigilon's H4 series 5MP and Bosch's 5MP starlight were not included in this test, as both are 2-3 years old as of this test. We will test any new generation 5MP models claiming improved low light, WDR, or IR performance as they are released.

Pricing of cameras in this test varied widely, from a high of ~$1,200 USD (Axis Q3517-LVE) to a low of ~$300 (Dahua N52BM3Z). However, Dahua and Hikvision lacked advanced features found in the Axis and Hanwha cameras, such as digital image stabilization, leveling assist, shock detection, or audio analytics, and the Hikvision 4565 included only digital WDR.

In low light with IR on (~0.12lx and below), the Axis Q3517-LVE provides much better detail than any other camera in this test, with clearer subject details and text and an overall brighter image. The Hanwha XNV-8080R provides some usable facial details of the subject and legibility near that of the Axis camera, while only rough details and limited text are visible in the Dahua and Hikvision cameras. 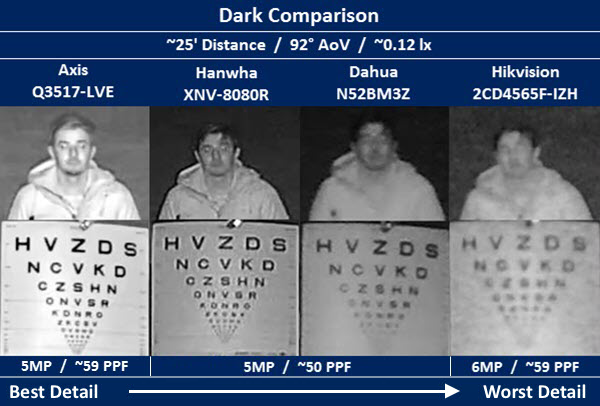 At longer distance, the Axis camera again provides clearer images, with the subject difficult to see on other cameras, especially the Dahua N52BM3Z. 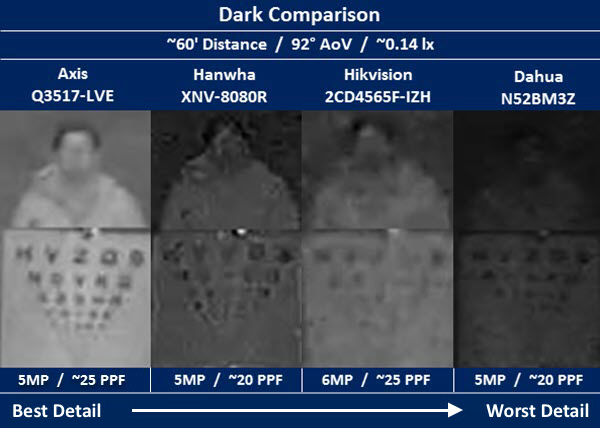 Axis Most Even IR Coverage, Others Dim At Edges

The Axis Q3517-LVE provided the most even IR coverage of test scenes, with a slight decrease in details at the edge of the field of view compared to the center. 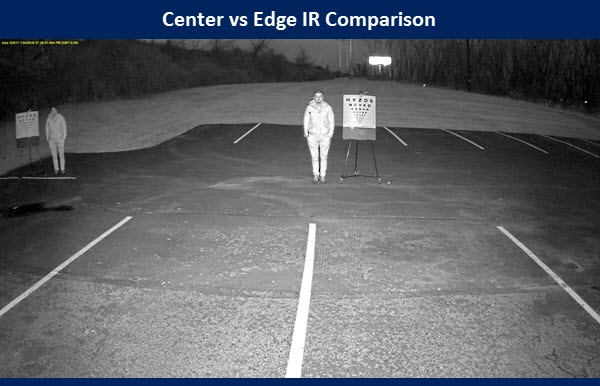 However, the subject was very dimly illuminated at the edges of the Dahua, Hanwha, and Hikvision models, and difficult to see, shown below. 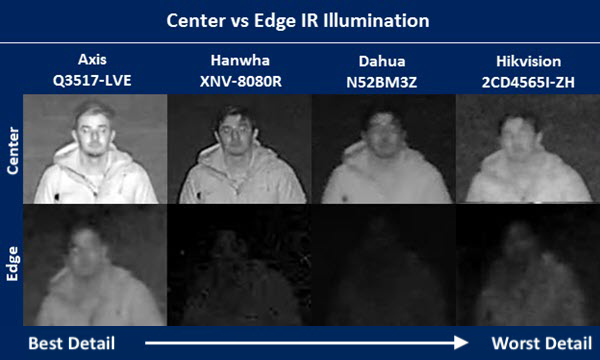 Testing color low light performance (~1-4lx) outdoors, the Q3517-LVE and XNV-8080R perform similarly, with overexposure present in both and similar subject details. However, as in the IR low light tests, the Dahua and Hikvision models perform worst, with limited subject details and almost total overexposure of the test chart. 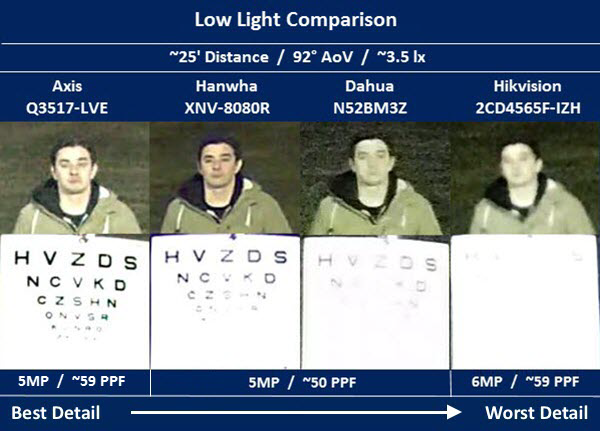 Results were similar at other ranges, as well, shown below at 60' distance, with the Axis and Hanwha cameras again best. 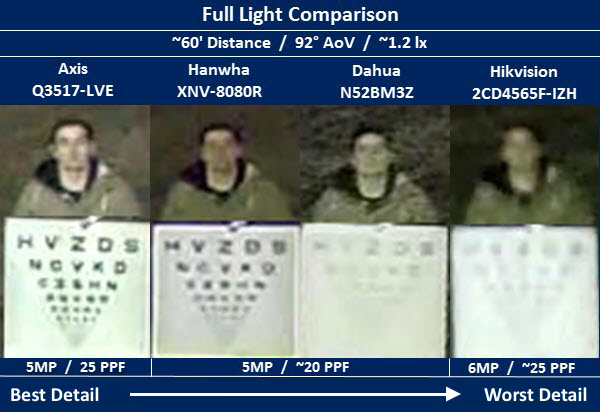 We tested WDR performance starting at an exit door scene with extreme variance (~45lx inside compared to ~9,000lx outside), with the cameras forced to adjust to rapid change in light. 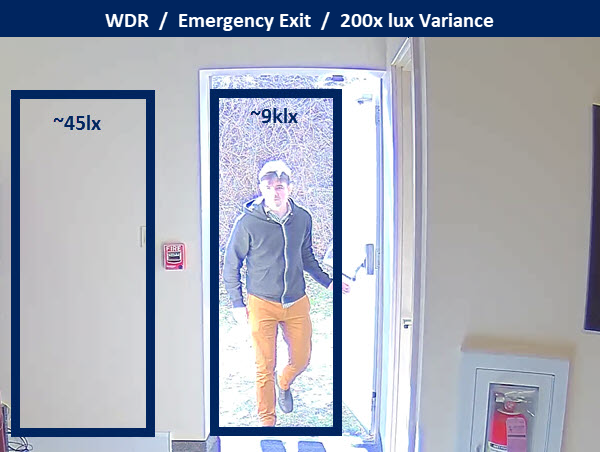 In this scene, the Axis Q3517-LVE most clearly displays the subject at all points, with clear images of the subject and background as he first opens the door (below). The Dahua N52BM3Z provides details at this point, as well, but both Hanwha and Hikvision overexpose his face and the background. Note that the Hikvision 4565 is not a true WDR camera, using digital WDR only, while all others use multiple exposures. 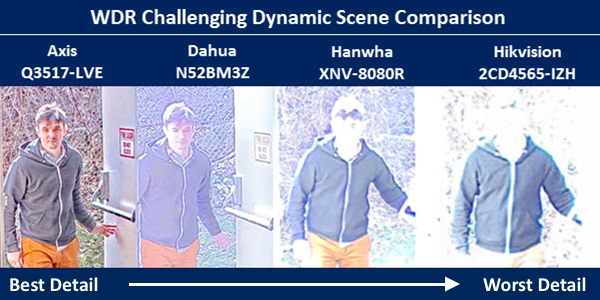 Once inside the door, the Q3517 and Dahua models provide better facial details than others.

We also tested WDR performance in a less challenging scene, a warehouse with open overhead door, varying from ~90lx inside to 12,000lx outside. 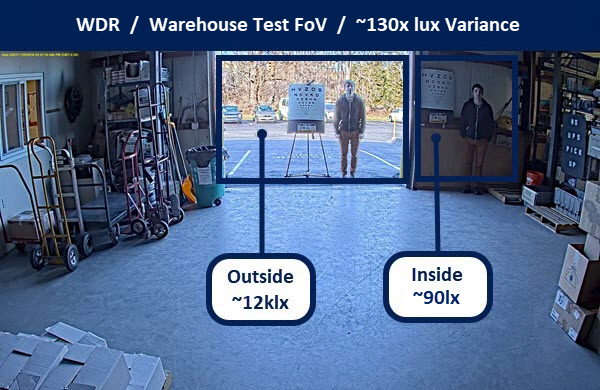 In this scene, the Axis and Dahua cameras provide the best details of the subject, with Hanwha close, but slightly less detailed. The digital WDR Hikvision camera again performs worst. 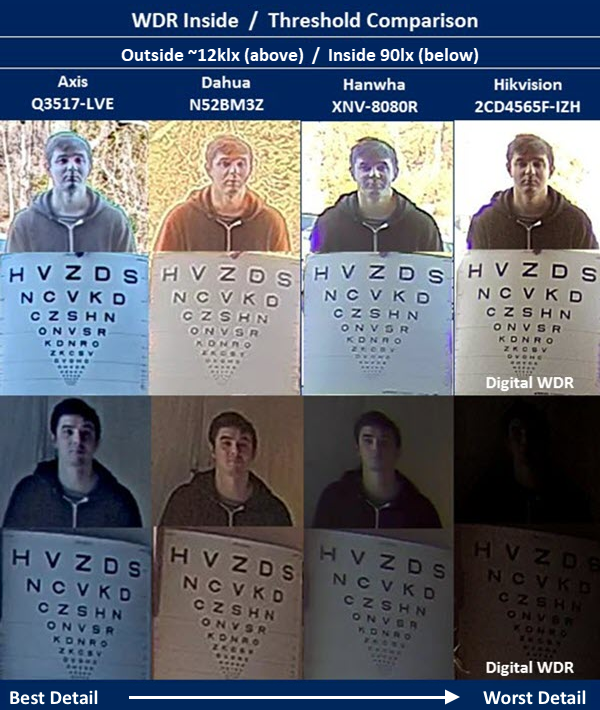 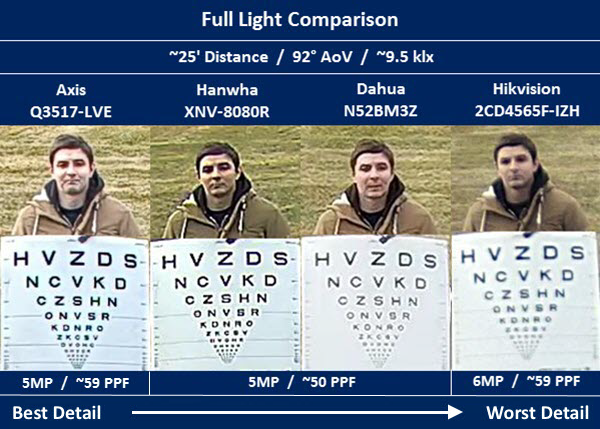 Relative performance was similar at longer ranges, with all cameras displaying similar details.

Of cameras tested, the Axis Q3517 was the largest, 1-2" larger than the Hanwha and Hikvision models, typical size for outdoor domes. By contrast, the Dahua N52BM3Z was much smaller than average, closer to indoor minidome size. The four cameras are shown side by side below:

Aside from size, physical features of the tested domes were similar, with these key differences: 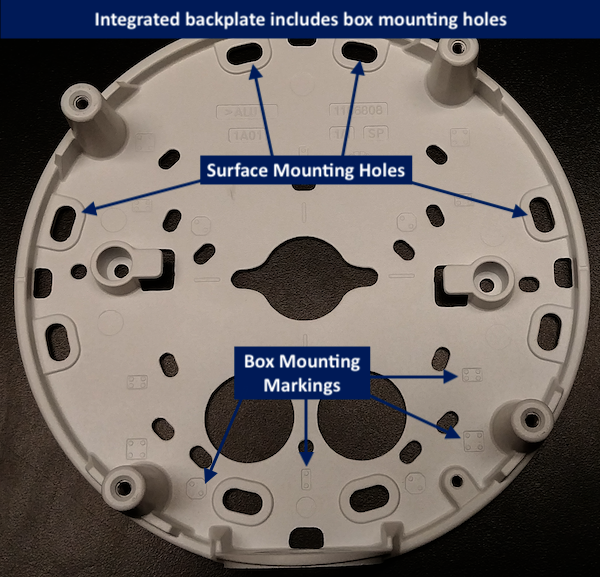 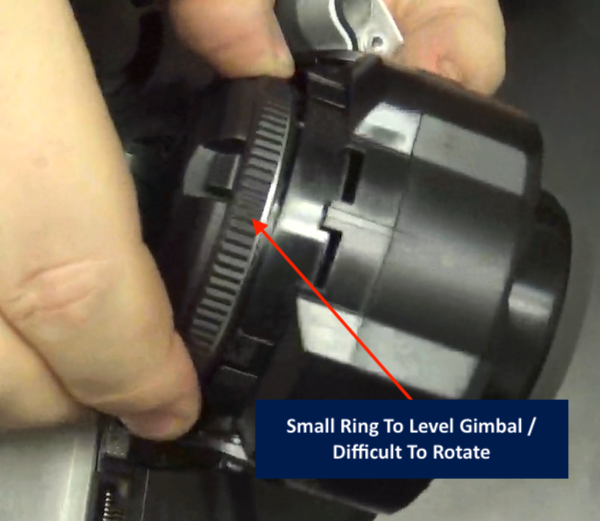 Additionally, the Dahua and Hikvision cameras lacked advanced features found in the Axis and Hanwha models, such as electronic image stabilization, leveling assist, shock detection, or audio analytics. See our tests of the Q3517 and XNV-8080R for details on operation of these features.

Of cameras tested, only the Dahua and Hanwha models support H.265, with Genetec and Milestone supporting these streams for both. Exacq and Network Optix (and Wave/Spectrum) also supported the Hanwha camera's H.265 stream, but not Dahua.

The Axis Q3517-LVE had the lowest bitrates of cameras tested in all scenes by a notable margin, lower than, less than half the bitrate of Hikvision H.264 (next closest) in full light and 100-200 Kb/s lower than Dahua and Hanwha's H.265 streams in low light. Note that all cameras increased in low light except the Dahua N52BM3Z, which decreased due to its dark, unusable images with IR on. 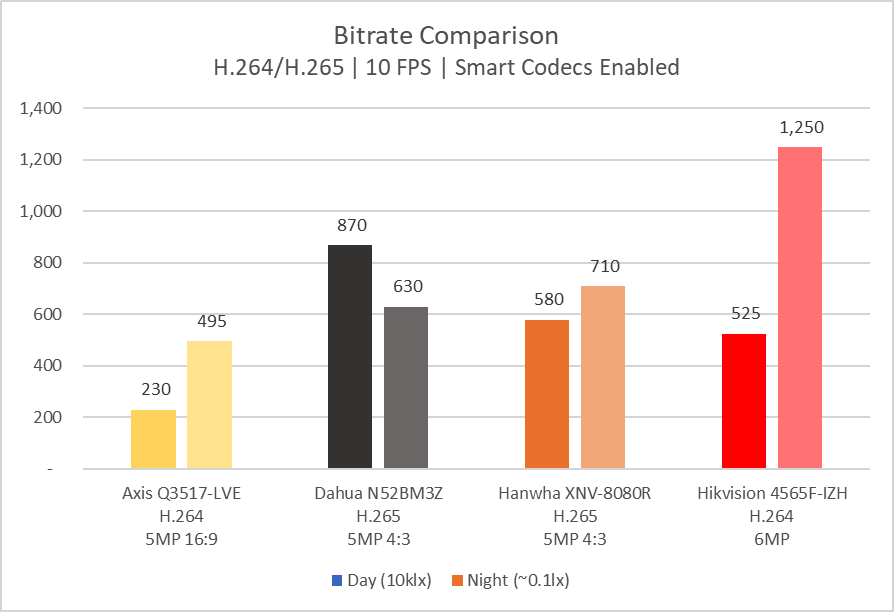 The following firmware versions were used for this test:

The following adjustments were made to cameras in this test: